The Moon Coin, Richard Due 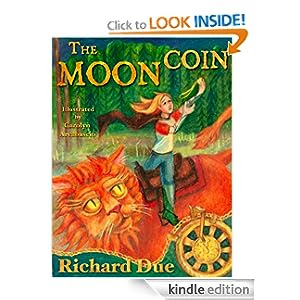 Nine Moons Make A Realm...An Oft Repeated Fact By Two Young, New Fans Of The Moon Coin
Author Richard Due has written a fabulous adventure for young minds to immerse themselves in mystery, discovery, wonder, and danger.  Jasper and Lily are wonderfully created characters, full of personality, life, and depth.  This fact endeared the book to me at once, as the brother and sister of Due's making lacked all the boredom, laziness, un-imaginative apathy, and mock-maturity of too many middle grade characters.  Eager to learn and acutely aware of right and wrong, Jasper and Lily engage in antics of youth with curious bliss rather than the dark brooding of misunderstood angst.

A read-aloud for younger children, The Moon Coin could be enjoyed through the middle grades easily.  Intricate sentence structure, vivid descriptions, and complexity of storyline make Due's offering a welcome treat for young readers/listeners.

I (Moira) read The Moon Coin aloud to my seven and eight year old sons; and believe me when I tell you, they begged for more.  The story, while quite detailed, held their interest throughout.  They would stop me to inquire about words they didn't understand (style points for Due in incorperating rich vocabulary) and then quiet down to listen once again.  The chapters are long, so be aware if you plan to read-aloud - bring a cup of tea!

The electrimals remained a favorite for both boys, but there was no lack of creativity to choose from.  Lunariums, Mr. Phixit, nine-sided windows, puzzles to solve, and clues to dicipher abound within The Moon Coin, earning my highest recommendation.
~ Moira

We Broads love comments! Thanks for stopping by.....

Popular posts from this blog

Broads On A Budget: Fresh, Healthy, and Within The Budget!

September 21, 2017
Lately, I've seen a few news segments citing the higher cost in buying fresh produce and healthy foods compared with processed, prepared, packaged, but far from healthy products.  This caught my attention.  Eating for health is... well, sort of my goal.  I want my family (and myself!) to be healthy, but what I want most is to enjoy my food while feeling great about it's health and nutrition benefits. We can watch every cooking show on the cable channels, read each new cooking magazine with eager determination, and lose an hour (or two!) on Pinterest boards, but if we can't afford the grocery bill to create all those wonderful meals - it's all a wash.  So...is it possible to prepare healthy meals with fresh ingredients AND stick to a budget?  Broads everywhere know the answer is YOUUUU BETCHA! One issue I struggled with was meal-plan-cohesiveness.  In other words, creating my weekly meal plan around my fresh ingredients on hand to avoid waste.  (Who else has cring
Post a Comment
Read more

My Cheers and Apologies

January 02, 2013
Hello out there!   This is Willow, saying that we are sorry to be gone for so long, but we are back now. Happy new year, by the way!   2013 is looking good, even if just for the fact our impending doom isn’t written in at the end.   I give it about a week until there is a new plot to destroy humankind.   But anyways, how have you all been?   It has been good over here, but a little hectic.   School, holidays, and simple family life have been crazy, all with the purpose of keeping us away from you wonderful people.   Like I said though, we are back now.   My Christmas was a good haul, bringing in more books than I have room for, so there should be some reviews coming your way from my end of the ring.   I am not sure I can speak for anyone else, but don’t worry, I think I can convince them that there is simply no way they can put off their lovely readers for any longer.   I hope you have a wonderful day, full of good books, wonderful ideas, and lots of green tea (my personal brain j
1 comment
Read more

September 23, 2013
Homemade Yogurt!       Yes, that's right, homemade yogurt. This is something I've been wanting to try for a while now. I mean, I've been making my own detergent and started making my own granola, why not yogurt too? So this started me browsing through all of internet land looking for a recipe I liked.             I guess I really shouldn't say recipe, as this implies differing ingredients.  The recipe for yogurt is pretty universal: milk and starter.  Starter being yogurt with active cultures in it.  If it has it, it will say somewhere on the container.  If you do not have this you will not make yogurt, you'll only make milk that has been heated, left to sit, and cooled.  Not very tasty.  Now there can be additions like dry milk powder or even gelatin for extra thickening if you're using, say, skim milk.        The biggest difference really is how many ways people make it.  They find what works for them.  Some make it using a crockpot, their oven, a h
3 comments
Read more